The Maharshi University of Spirituality uses advanced sixth sense as the primary tool or mechanism to study the spiritual dimension and subtle energies and thereby formulate conclusions about its effect on people and the environment. In addition to using advanced sixth sense as an investigative and analysis tool, the University also uses supplementary tools such as aura and energy scanners. Research undertaken with aura and energy scanners add value as they provide much needed tangible evidence that corroborates the findings (of the spiritual research team) which have already been obtained through sixth sense. When using aura and energy scanners, the data sets used by the spiritual research team are relatively small as compared to those used for traditional research methods. This is because more detailed and conclusive findings have already been obtained by the spiritual research team through advanced sixth sense. Accordingly, such experiments using scanning instruments become more important as a source of direction for further research to be conducted by interested experts in their field who primarily use just traditional research methodologies.

1. Background and purpose of the experiment

1.1 The science behind the healing properties of box treatment

H.H. Dr Athavale wondered how this new healing method could be replicated so that others could benefit spiritually from it. Spiritual research was subsequently carried out to understand the spiritual principle underlying this new healing remedy. The answer that was received through advanced sixth sense was paradoxically ‘nothing’.  Empty drawers consisted of ‘nothing’ and a vacuum or void is directly related to the powerful Absolute Ether Principle (Ākāshtattva). (The Absolute Ether Principle is one of the Five Absolute Cosmic Elements that the universe is made up of. For more information, refer to the article on the 5 Absolute Cosmic Principles.)

The spiritual research team found that by using (easily available) empty cardboard boxes people  could benefit from the same spiritual healing effect of the Absolute Ether Principle. This is because the empty space in the box consists of a void which is predominantly made up of the Absolute Ether principle. By simply placing an empty box or a number of them in close proximity to a person, it was discovered that it has the potential to suck negative distressing energy out of the person’s physical and subtle body system. This became known as the ‘Box treatment’ and was incorporated by seekers as one of their regular spiritual healing practices. For more detailed information with regards to Box treatment please refer to SSRF’s article on spiritual healing using Box treatment.

Apart from the numerous accounts of seekers who have had personal accounts of how Box treatment has provided them with relief, the spiritual research team at the Maharshi University of Spirituality also conducted tests using aura and energy scanners. In this experiment the Aura Energy and The Universal Thermo Scanner (UTS) was used to test the effect of the Box treatment. 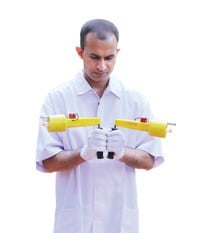 This instrument is used to measure the energy and the aura around any object (living or non-living). It has been developed by Dr Mannem Murthy, a former nuclear scientist from Hyderabad, India in the year 2003. It can measure distressing vibrations along with positive vibrations emitted from an object. It is also able to measure the extent of the aura of the object into the surrounding area.  When taking a measurement, the 2 arms of the scanner may or may not open out. The angle made by the two arms is noted in degrees from 0 to 180 degrees. Only when the arms open out to 180° can the subsequent step of measuring the distance of the aura (in relation to that aspect) be performed. The spiritual research team has used this instrument successfully to measure changes in various objects (living and non-living) after being exposed to various stimuli.

For more information refer to: http://www.vedicauraenergy.com/universal_scanner.html

In the experiment, a seeker was asked to sit between 4 boxes as depicted in the picture below for a period of 10 minutes. The seeker who took part in this experiment suffered from severe spiritual distress. 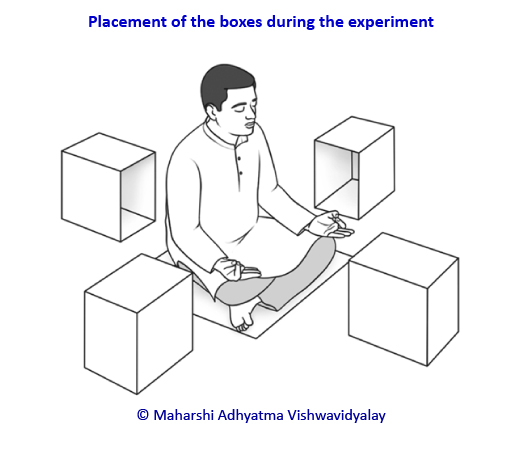 Readings were taken using the UTS just before and after the Box treatment. 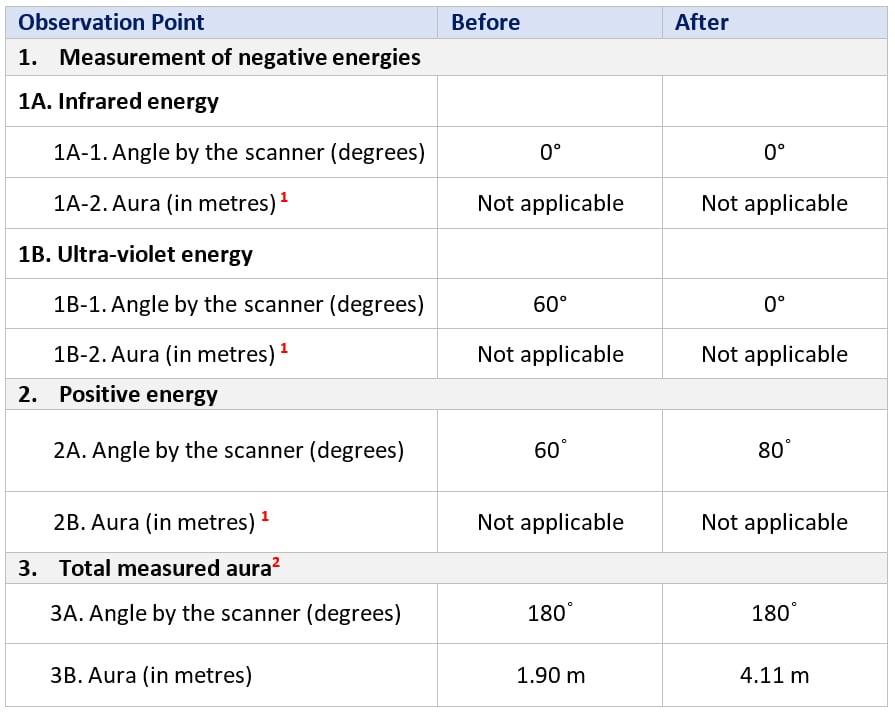 4. Analysis and conclusions from the Box treatment experiment

The key observations from the experiment (referring to the above table) are :