Short summary : While there is an emerging trend or demand for eco-friendly Ganesh Murtis (Idols), there is little to no thought put into whether they emit spiritually positive vibrations. 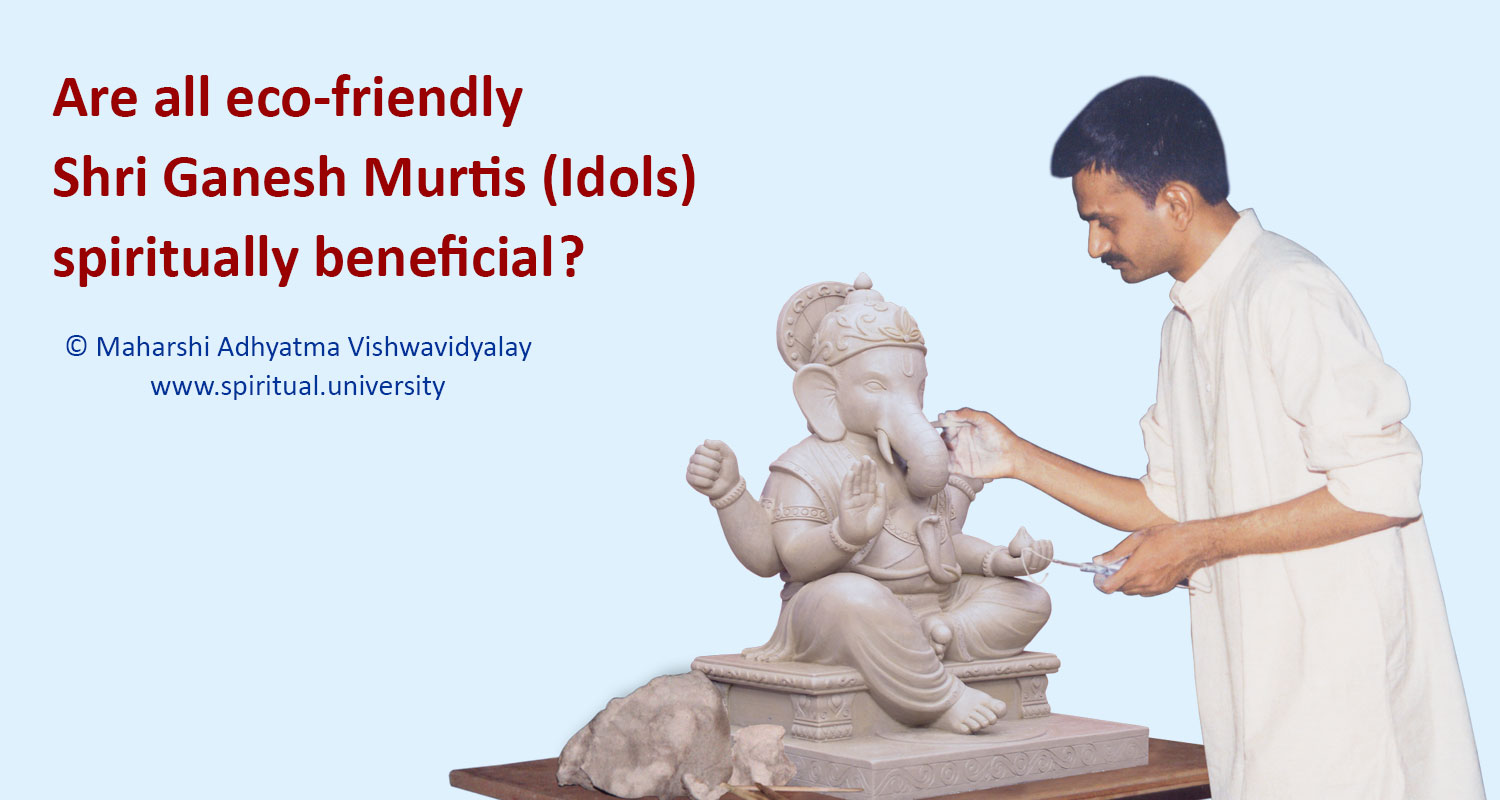 This article is based on research conducted by the Sculpture Department of the Maharshi Adhyatma Vishwavidyalay, Goa, India.

Another year has gone by and the festival of Ganesh Chaturthi is upon us. Deity Ganapati is widely worshipped all over India. The festival of Ganesh Chaturthi celebrates the period when the waves of the Deity Ganapati Principle are 1000 times more active on Earth. While the actual festival date falls on 22 Aug 2020 this year, the ritualistic practices of the immersion of the Shri Ganesh Murti into the sea, lakes and rivers will continue for over 10 days. After the ritualistic worship of Shri Ganesh Murti, it is immersed in flowing water. This immersion is done to spread positive vibrations into the environment.

In recent times, a large proportion of the Idols that are meant for immersion are being made from plaster of Paris and toxic, non-biodegradable chemical colours. As a result, the immersion ends up causing considerable harm to the environment and marine life with such Idols taking months if not years to fully decompose.

Actually, this damage would never happen if people were to follow the scriptures. This is because traditionally the Shri Ganapati Idol is supposed to be made from Shadu mati (a type of clay) which should dissolve immediately in the water, thus spreading spiritual positivity from the Idol into the water and the environment. Shadu mati is a soft whitish clay generally obtained from a riverbed.

In the past few years, there has been an increasing push to move away from materials such as plaster of Paris and to use more eco-friendly materials to make Shri Ganesh Murtis. The chart below is a screenshot from Google trends showing how people at the time of Ganesh Chaturthi (in August or September) are increasingly searching for eco-friendly Ganesh Idols in greater numbers, and this is also reflecting the increased demand for such Idols. 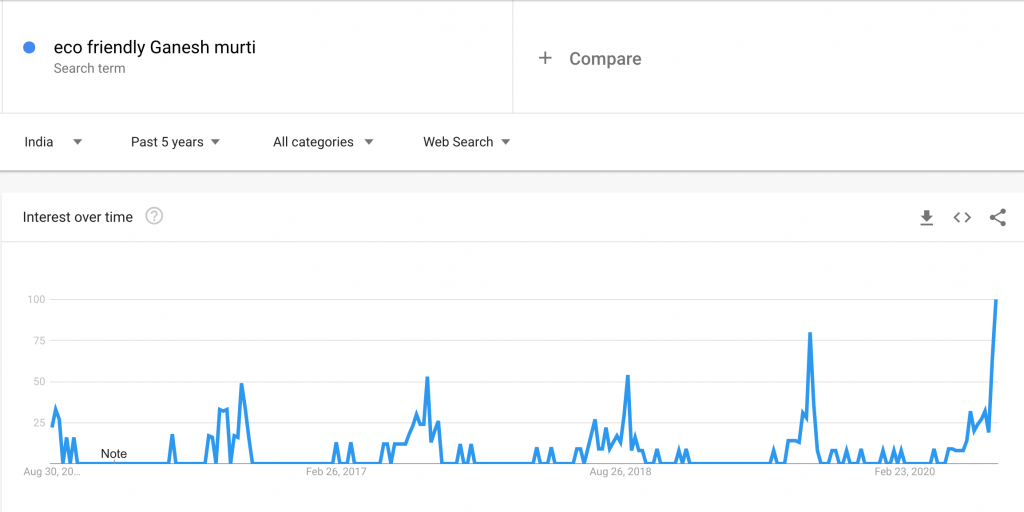 Leading newspapers and environmentalists have applauded this eco-friendly trend, welcoming the innovative use of materials apart from clay such as cow dung, chocolate, sugarcane, alum, coconut husks, etc., which have been used in the making of the Idols. It is reported that some Idols are made with clay but stuffed with fish-friendly food such as corn, spinach, wheat and vegetable powder.

Of the various organic materials, cow dung is being promoted as a more spiritually pure substance that is in line with Hindu traditions. “After all,” the Idol makers say, “the Indian cow has a special place in Hindu culture”. The Idol makers for the Shri Ganesh Murti have advocated the following benefits by using cow dung :

However, the question remains, in an effort to be more innovative and make eco-friendly Shri Ganesh Murtis, are the Idols providing the spiritual benefit to the devotees for which so much effort is being taken ?

When an Idol maker sets out to make an Idol, the thing that should be uppermost in his mind is to make the Idol in such a manner so that it attracts and emits the Deity principle (that the Idol represents) to the maximum. This is because the Idol will then spread spiritual positivity in society.

However, this is easier said than done.

To attract and emit the maximum amount of Deity principle, the Idol or Murti needs to closely resemble the Deity’s actual form. Since Deities are most subtle in nature and most Idol makers do not have an advanced sixth sense of vision, they are invariably guessing the actual form. As a result, a large proportion of their craft is based on copying some other Idols that are psychologically pleasing to them or using some artistic license to make the Idol different in design to stand out.

What most people do not know is that even small changes in shape can increase the positive subtle vibrations from the Idol considerably or it can even make the Idol emit negative vibrations.

To illustrate this concept that Idols of the same Deity can emit different vibrations depending on how they are made, we compared different 5 different Shri Ganesh Murtis made from the following materials.

To illustrate this concept that Idols of the same Deity can emit different vibrations depending on how they are made, we compared different 5 different Shri Ganesh Murtis made from the following materials. 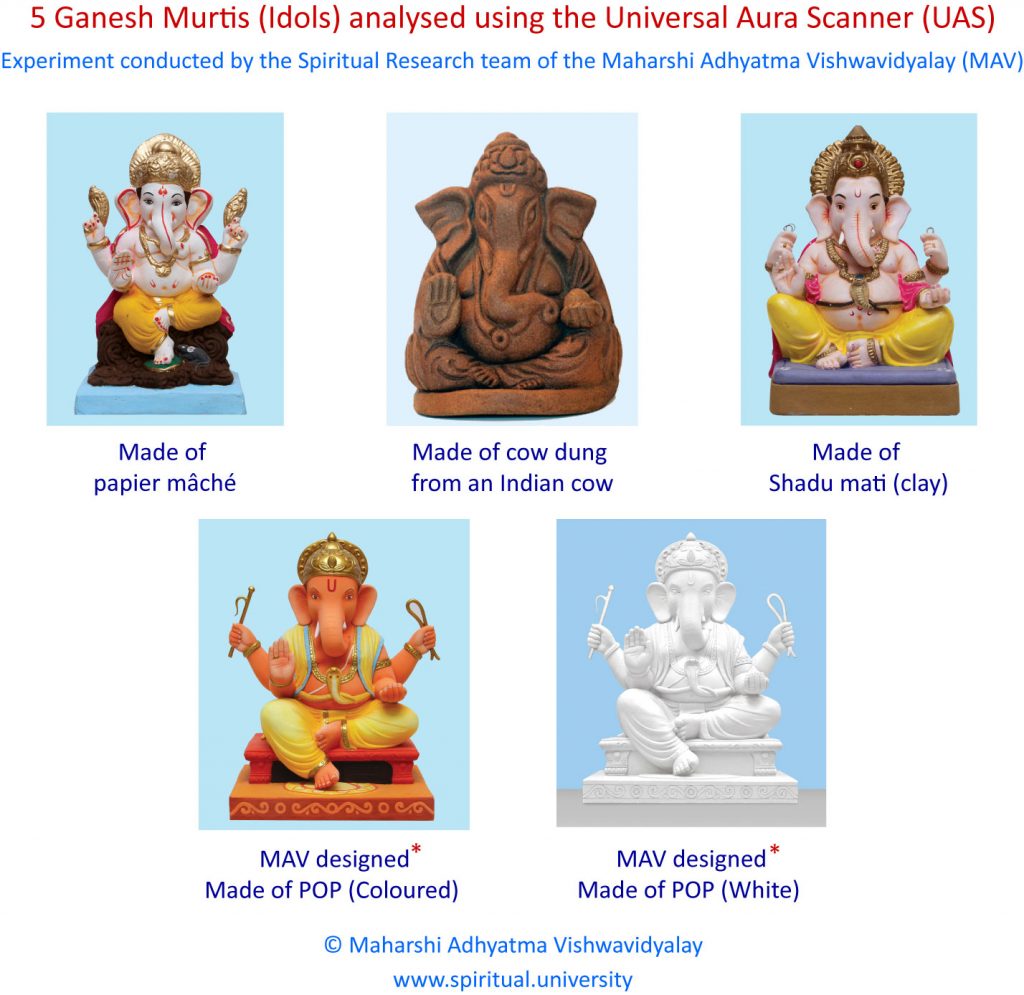 * Please note : The two POP Shri Ganesh Murtis have been made by the Sculpture department at the Maharshi Adhyatma Vishwavidyalay (also known as the Maharshi University of Spirituality). The original Idol meant for worship and immersion was made of Shadu mati (clay). For educational and research purposes, the Idols made by MAV were later made from plaster of Paris (POP) as it is less susceptible to damage. These Idols are not meant for immersion.

Using this instrument, the 5 Ganesh Murtis (Idols) were measured for 3 criteria, i.e. negative aura, positive aura and measured aura (which is like a combined aura). The instrument measures for two types of negative energy auras, i.e. Infrared (IR, Type 1 Negative aura) and Ultraviolet (UV, Type 2 Negative aura). The spiritual research team has used this instrument extensively and has found it to be fairly accurate. Its results corroborate readings of the same objects taken using the advanced sixth sense of members of the spiritual research team. 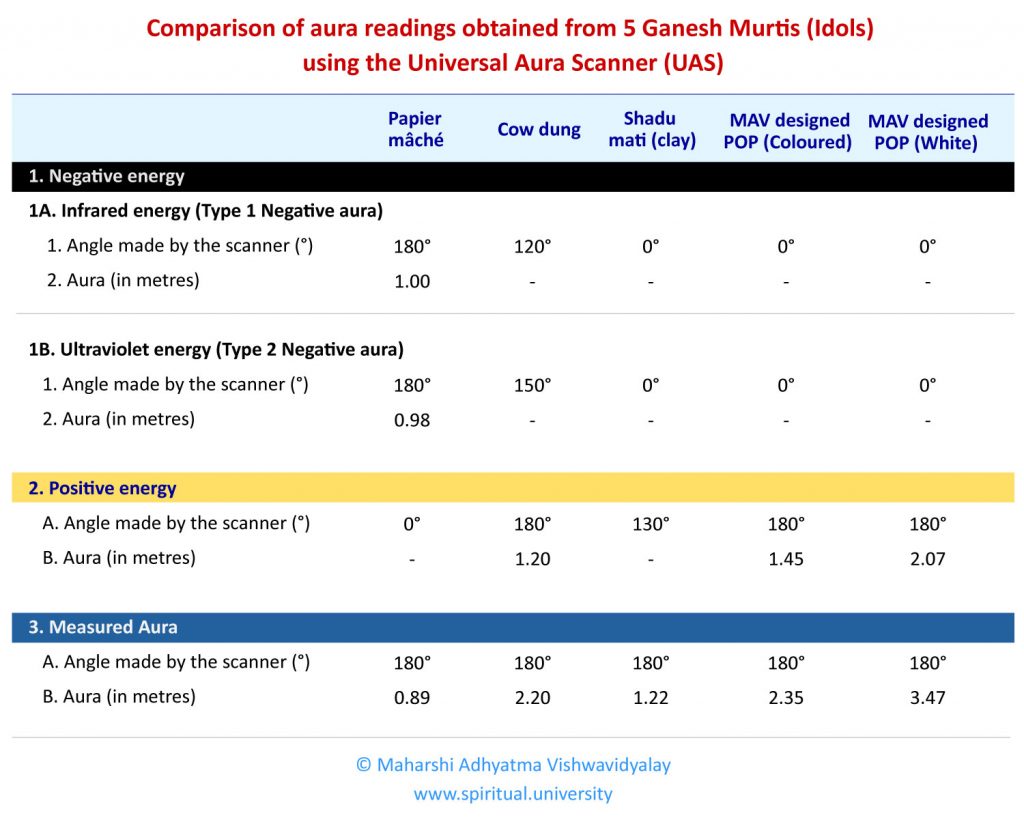 3. Why should one not use cow dung to make eco-friendly Ganesh Murtis (Idols) ?

Since cow dung is sattvik, there has been a move to make Shri Ganesh Murtis (Idols) out of it. However, as the experiment shows, Idols made from cow dung of an Indian cow can emit negativity as well. When a devotee worships such an Idol, he does not get any spiritual benefit from the Idol.

The reason for the negativity from the Idol made from cow dung is due to a combination of an incorrect shape and the material used. Ideally, Shri Ganesh Murtis (Idols) meant for immersion should be made from Shadu mati (clay) or mud that has been obtained from a spiritually purer area. In the table below, it will become clear as to why Shadu mati should be used instead of cow dung of an Indian cow.

Above all, the shape of the Shri Ganesh Idol should also be closest to the actual form of the Deity. Many years of research have gone into perfecting the shape of the Shri Ganesh Murti (Idol) by the seekers in the Sculpture department at the Maharshi Adhyatma Vishwavidyalay in Goa, India. The main reasons they have been able to perform this sculptural milestone is due to the guidance of Paratpar Guru (Dr) Jayant Athavale, the founder of the Maharshi Adhyatma Vishwavidyalay.

4. Factors affecting the ability to create a sattvik Idol

The table below lists the various factors that affect the ability of an artist to create a sattvik Idol of a Deity. The relative importance of each factor has also been provided.

This means that 95% of the factors that help in creating a sattvik Idol of a Deity are spiritual in nature.

5. Some learnings from the process of making the Shri Ganesh Murti (Idol)

The movement across India to use eco-friendly Shri Ganesh Murtis (Idols) is indeed commendable and it will help to reduce environmental pollution and also the denigration of Deity Ganapati. However, experimenting with organic materials is not the answer. Idol makers and devotees should consider both the shape and the material along with the colours used when making / worshiping an Idol. They can take direction to learn from the shape of the Shri Ganesh Murti made at the Maharshi Adhyatma Vishwavidyalay. We invite all Idol makers to contact us to learn how to gain the maximum spiritual benefit from their craft and how to spread positivity in society.