1. Background and purpose of the experiment

Negative energies affect people and cause them distress with their subtle black energy. Black energy can create a variety of problems such as depression, unclear thinking or malfunction of an organ which can lead to even further difficulties such as addiction, financial problems or chest pain respectively.

The Salt Water Spiritual Remedy is a simple but effective remedy that drains black energy from the body. Many seekers around the world have experienced marked improvements in the quality of their lives and spiritual practice by including the salt water remedy in their spiritual healing regimen.

This instrument is used to measure the energy and the aura around any object (living or non-living). It has been developed by Dr Mannem Murthy, a former nuclear scientist from Hyderabad, India in the year 2003. It can measure distressing vibrations along with positive vibrations emitted from an object. It is also able to measure the extent of the aura of the object into the surrounding area. When taking a measurement, the 2 arms of the scanner open out and the reading is taken based on how much the arms opened out in degrees. Only when the arms open out to 180° can the aura in relation to that aspect be measured. For more information refer to: http://www.vedicauraenergy.com/universal_scanner.html

The subject’s readings were taken before and after carrying out the Salt Water Remedy using the Universal Thermo Scanner (UTS). The Salt Water Remedy was done for 15 minutes in lukewarm water. The experiment was conducted on 25-December-2016 at the Spiritual Research Centre and Ashram in Goa, India.

The UTS instrument allows one to measure 4 types of energies emitted by a subject. The readings of the seeker (who is afflicted with spiritual distress) were taken before and after the Salt Water Remedy was performed. The readings are listed below for all the 4 types of subtle energies. 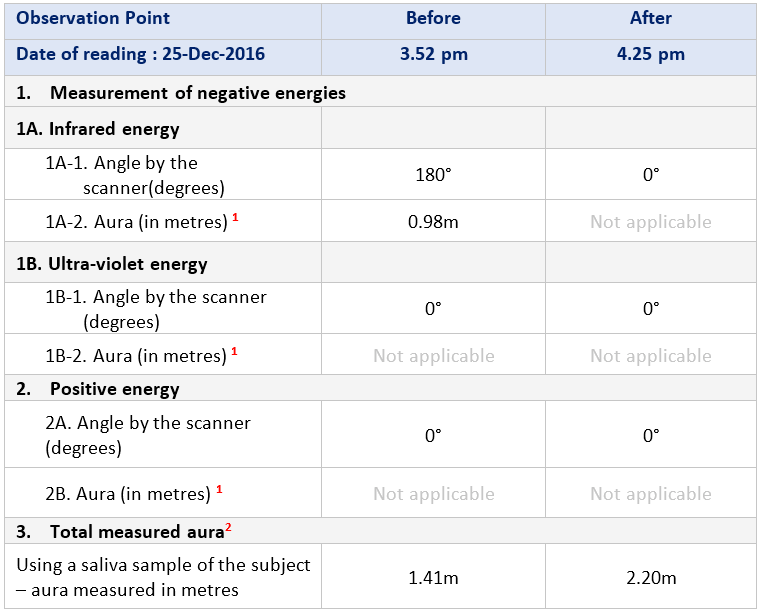 There are some remarkable differences in the readings before and after the Salt Water Remedy.

This experiment along with the testimonials from hundreds of seekers who felt better after the remedy shows the efficacy of Salt Water Remedy as a natural way to reduce subtle black energy and distressing vibrations (which are Raja-Tama in nature) from the body. We appeal to scientists who are interested in carrying out further research on the Salt Water Remedy to contact us using our contact form.