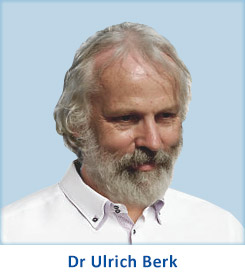 Dr Ulrich Berk: On 15 Apr 2014, Dr Ulrich Berk visited the Spiritual Research Centre and Ashram. Dr Berk, from Müblingen, Germany, is a PhD in Philosophy, former professor at the University and the President of German Association for Homa therapy and is an expert in Agnihotra. He has been performing the Agnihotra ritual for the past 35 years and is an ardent advocate of the ritual. He has been conducting research on the Agnihotra ritual and how it positively affects our environment. In fact he is the co-ordinator of all research on Agnihotra worldwide.

Upon visiting the Spiritual Research Centre and Ashram, Dr Berk shared, “I was impressed by the professionalism in the work your volunteers do – spreading the Vēdic knowledge in the form of newspapers, some magazines, many books, and also using the media of Internet, audio and video. Then, having so much literature translated in many Indian languages and International languages – really a big challenge! Of course I was happy to see that soon the first book in the German language will also be printed.

Your studies on the effects of subtle energies including the exhibition of objects, which show such effects, is very interesting. 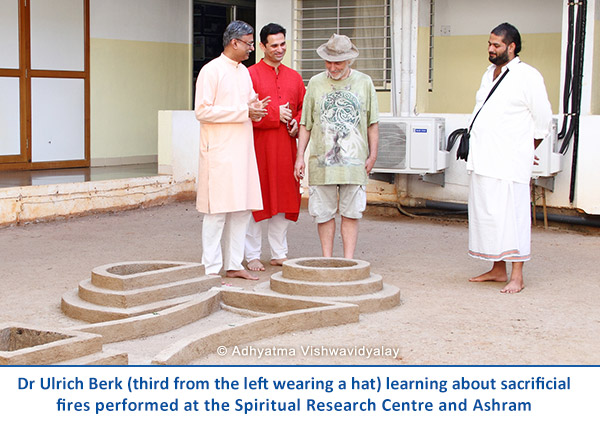 Modern science still has some way to go in order to understand such phenomena. But if we can show replicable effects of methods like Agnihotra on PIP photos it will help to increase the acceptance and also hopefully get some scientists interested to look deeper into this area.

It was a very positive experience to see all the volunteers working in the Ashram with positive spirits, smiling, though doing concentrated and professional work there. Very encouraging seeing that these two things can go hand in hand.”

Mr Mayank Barjatya is a bio-architect with a professional and research background in architecture, human energetics, vastushastra and the environment. Along with this, he also has a deep interest in metaphysical studies. Mayank has 20 years of experience in the field and he often travels internationally for various projects. Mayank was intrigued on hearing about the various unexplained phenomena such as spontaneous blood stains, spontaneous combustion and Divine particles at the Spiritual Research Centre and Ashram. On 13 Jun 2014, Mayank paid the Spiritual Research Centre a two-day visit in order to conduct some preliminary research on the premises along with the spiritual research team using an Esmog Spion instrument (which measures electro-stress) and a Lecher Antenna. He conducted various experiments and further has expressed interest in taking time out from his busy schedule to conduct a few more research projects to understand the effect of the highly energised environment of the Spiritual Research Centre on a person and vice versa.

Mayank believes that we need to become conscious of the coincidences in our lives that some other processes are operating. After the visit to the Spiritual Research Centre he reflected in his magazine ‘Vastu Times – Prithwe, “I could very well say all the coincidences that happened since the year 2012 has taken the form of a series of events which point to a higher path. Each of these is a message leading to a grander awareness. There is a spiritual program in operation. Each time I feel the same I notice that similar coincidences are happening more often. One such incidence had led me to the Spiritual Research Centre and Ashram in Goa a few months back. I call this energy – mystical consciousness.” 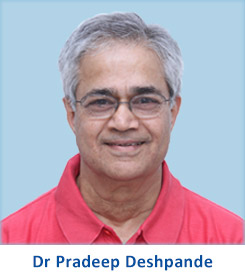 Dr Pradeep B Deshpande (President and CEO, Six Sigma & Advanced Controls, Inc. US) : Dr Pradeep B Deshpande is the President & CEO and Professor Emeritus of Chemical Engineering at the University of Louisville. He founded Six Sigma & Advanced Controls, Inc. US. He has done extensive research for over 35 years in the field. Dr Pradeep was drawn to the Spiritual Research Centre and Ashram when samples of Divine particles found at the Spiritual Research Centre and Ashram in Goa were sent to Him in the USA and He performed scientific research on them. He later published two research papers on this subject – Power of  editation: Materialization of Energy/Intentions.

He visited the Spiritual Research Centre and Ashram on 17th January 2015 and he was and was very fascinated by the spiritual research being performed at the Centre.

He expressed his views about various aspects observed at the Spiritual Research Centre and Ashram. He said that, “If the scientific process underlying the Divine particles found at the Centre is revealed to the world; it will unravel the process of Creation of the Universe. As per modern science the world is always in a process of transformation and expansion. If we saw the world about 13.8 billion years ago; it was even smaller than a dot which we put on a paper. That world has materialised from an unmaterialised state. The materialisation of Divine particles which are an amalgamation of Divine consciousness (Chaitanya) reveals in essence the process of going from subtle to gross and or materialisation from the unmanifest or Nirgun form of God; and explains the process of creation of the world.”

He said that the seekers of the Spiritual Research Centre and Ashram have a lot of Sattva or spiritually pure component in them. In his words He called it the ‘S Component’. Dr Pradeep wanted to learn how to imbibe and increase the Sattva component in oneself. When the 8 steps of Gurukrupayoga (Path of Guru’s grace) namely – chanting, satsang, satsēvā , sacrifice, love without expectations and personality defect removal and ego removal were explained to him as the process that increases Sattva component, he immediately made a note of it. 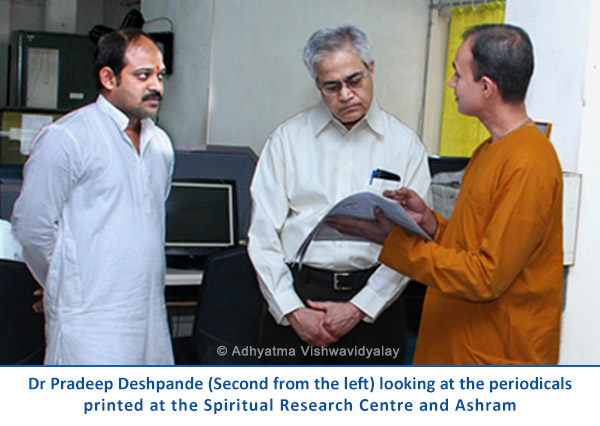 Dr Pradeep said, “The vibrations in the Spiritual Research Centre and Ashram are amazing and very powerful. If I try to make a note of how the small incidents that orchestrated my coming here, I have lost count. But I am very grateful for the experience.”

Dr Pradeep measured the bio-energy field of 5 seekers within the Spiritual Research Centre and ashram with Bio-well GDV Device where he saw a positive change in the readings before and after the seekers did chanting in the room previously used by H.H. Dr Athavale. These experiments proved the importance of chanting God’s Name in a spiritually pure environment.